This project includes playable whistle on F2 plus short, medium and long whistle.

All sounds are in fine 16-bit quality without artefacts or background noise. The whistles have a nice and subtle echo that slowly fades out.

Furthermore, our projects offer features such as

Also you can activate a shunting mode. It offers different acceleration values, adjustable automatic coasting feature and individual max speed. All values are adjustable by CVs.

Not to mention the project contains

Besides, coal shovelling is always synchronized with Aux1, even as a random sound. Plus a whole spectrum of authentic sounds adding to your driving pleasure. 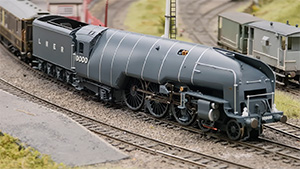 We came to this result after a quite comprehensive research based upon documentation and drawings provided by the national archive.

After consultations with engineers ,technicians and drivers we had the confirmation that our details were correct.

In contrast to other compound locomotives, the W1 had a special system for starting the locomotive.

With American compound locomotives, it was common practice to start the locomotive with exhaust steam from both cylinder groups to the chimney and to supply the low-pressure cylinders with live steam.

This was possible without problems because the high pressure cylinders were operated with more or less normal steam pressure of around 250 psi.

However, the pressure of the live steam at the W1 was 450 psi, so another system was chosen in which the exhaust steam from the high-pressure cylinders was directed into a reservoir. When starting up, if the reservoir had not built up sufficient pressure, the low-pressure cylinders were instead supplied with live steam via a pressure reducer (200 psi) and a valve operated from the driver's cab.

It was technically possible to drive off without the valve open, but then the first chuffs were not noticeable. This would be possible with easy load or when shunting or when it was "too laborious" for the driver to operate the valve.

We assume that the sound of the steam escaping into the pipes from the high-pressure cylinders could only be heard faintly.

We tried to recreate this sound, and you can control it with the throttle:

These could be set independently of each other.

The 2 operating levers for this were on the box that was to be found in the driver's cab to the left of the fire door. (The third lever was for operating the cylinder drain cocks.)

The steam reverser unit for the inner gears was clearly visible on the running board above the LH cylinder.

In our "single chimney" project, the steam reversers can be heard when changing direction.

At the latest (possibly earlier) when the W1 was converted to double blast pipe, it received a "screw gear operated gear control" via 2 rods, 25 ft and 31 ft long, the latter also being equipped with 2 bevel drives.

You can recognize this version by the visible front end of the 31 ft long rod in the lower area of ​​the boiler cladding on the LH side above the first drive wheel, and by the fact that the power steam reverser unit is missing on the left running board.

Due to the length of the rods and the numerous threads, there should have been a crank noise, perhaps also a faint creaking.

This noise can be heard in our "double blast pipe" project when changing the direction of travel.